Each GLU has a unique integer ID code (GLU_ID).

The complete set of GLUs are a subset of the full geodesic DGG covering all of Earth’s land, and were selected based on the spatial extent (land mask) of the LandScan 2007 global population density dataset (Dobson et al. 2000; 30 arc second resolution).  All GLUs that contained at least one LandScan pixel (including 0 population) were selected for use in GLOBE.  Land area within each GLU was calculated based on land coverage in LandScan 2007.

Global Variable values are calculated within each cell, including it’s land area (GLOBE calculations are based on land area within each GLU).

An example of GLUs covering Washington, D.C., USA and Baltimore, Maryland, USA is seen below. 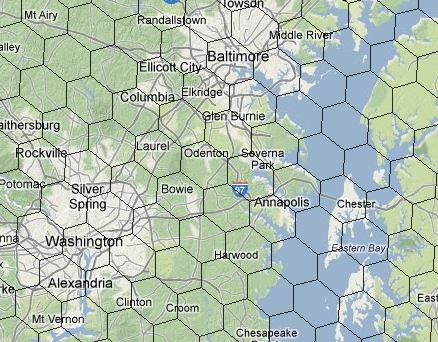